In my last post, I said that I’d post an update every 2-3 weeks. It’s been about 2 months now so I apologize for that! It’s been a hectic couple months for me, but I’m planning to post more regularly and even start a YouTube channel for this in 2021. I’m tempted to ramble about the happenings of my life in 2020, but I think we’ve all done enough reflecting on this trashpile of a year so let’s get right into it.

I decided that I wanted all the characters to be animals, like in Night in the Woods. I love dogs, so I drew the player character as the first dog that came to mind, which for some reason turned out to be a Siberian Husky. I haven’t really interacted with any but they look pretty cool. There’s still a lot of refining to do, but here’s what the player looks like from all possible angles: 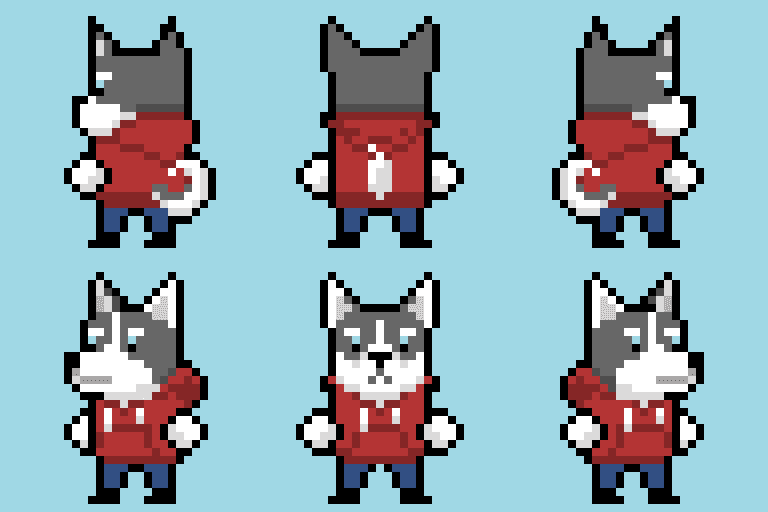 My next step will be creating running animations for the player. I don’t have much experience with pixel art animation but I’m looking forward to figuring it out.

I continued implementing the aiming mechanic, imitating Enter the Gungeon with how gun rotates and switches hands. Here’s how it looks with a static player sprite:

Things are going to get very technical in this post, so I encourage you to clone this commit of the project and follow along so that you can see the node hierarchy and better understand what’s going on. To play around with the aiming mechanic, open and play the Player.tscn scene.

Go ahead and open Gun.tscn and take a quick look at the node hierarchy before we jump into Gun.gd. Here’s the main logic in that script:

left_pos and right_pos are the positions of the player’s left and right hands (from our point of view, not the character’s). The gun’s position switches between these when certain rotation degrees are reached.

This function determines whether the gun has reached the rotation threshold to switch hands:

So what’s switch_buffer doing in there? In the gif above, you’ll notice that the gun doesn’t switch hands right when the cursor crosses the 90° or 270° threshold. There’s actually a buffer of 40° where the gun will not stay on its current hand. Without this buffer, the gun would rapidly switch back and forth between hands when its rotation was near the switch threshold. This is because the gun’s rotation changes when it switches hands, since it needs to continue pointing at the cursor. So if the gun is on the right and reaches 90°, it would switch to the left and rotate so that it’s aiming at the cursor, but now its rotation is actually less than 90°. Here’s what happens without this buffer:

Even after all that, the buffer still wasn’t enough to prevent this from happening when the cursor is close enough to the player for the gun’s rotation after switching hands to exceed the switch rotation threshold plus the buffer. This is why I added is_switch_disabled(). When this function returns true, the gun will not switch hands even when the its rotation is at a point where it normally would switch.

This is how the gun actually switches hands:

Without $Sprite.position.y += $Sprite.texture.get_height() and the inverse, this is what would happen (notice what happens when the gun is on the left):

Finally, we need to actually point the gun at the cursor:

look_at is a handy Node2D function that rotates an object to face a specified position, like a gun to its target. Unfortunately, getting the gun to point to the cursor wasn’t as simple as look_at(cursor_pos). Here’s what happened when I had only that one line of code:

It’s subtle, but you’ll see that the gun’s muzzle is not pointing at the cursor. Because the gun object’s origin is in the handle of the gun, the handle is what points to the cursor when you use look_at. Take another look at the node hierarchy in Gun.tscn and notice the position of the Sprite node in relation to the Gun node. I set it up this way so that the gun would rotate around the handle as its pivot point.

To counteract this, I used a code snippet I found in the Unity forums (the first snippet in the first reply). It takes the distance between the gun’s origin and the muzzle, and adds it to the cursor position (or subtracts it, depending on which side the gun is on). Then look_at is called with the new target position.

A web/game programming blog by Robyn Choi, a professional JavaScripter and amateur pixel artist in Vancouver, BC. To see some of my work, check out my portfolio website.