A couple weeks ago, I came up with an idea for a story-driven bullet hell game. You, the player, live in a town full of interesting NPCs with their own developing storylines (something like Night in the Woods), and you regularly go on missions to defeat various monsters, with combat mechanics similar to Enter the Gungeon. I’m calling it “Bullet Town” for now because it’s a bullet hell game that takes place in a town (I know, I’ll change it when I think of something better).

There are a few interesting mechanics I have in mind, like permanently destructible environments and maybe even preventable NPC deaths that affect the story.

I have a full-time day job and I’ll be creating all the art, code, and maybe even audio and music myself, so my progress will be relatively slow, but I’ll aim make progress posts like this every few 2-3 weeks.

The first thing I did was draw the player character, which is currently a little portrait of myself, because that’s always fun. Enter the Gungeon (EtG) was the first to come to mind when thinking of the art style for my game, so I copied the character art style from that game as a starting point. Here’s my first attempt at drawing the player character: 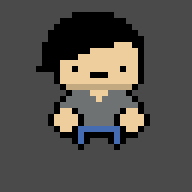 After an unsuccessful attempt to draw an EtG-like character of a non-femme woman without it looking like a man, I did a second pass to make it look less EtG-like and slightly less manly (but not really): 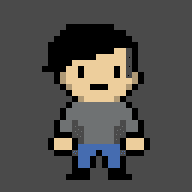 I realized that the hands would need to be detached so that they could move with the character’s gun as you aim, like in EtG. The next step will be changing the character’s torso to make it look acceptable that it has no arms. I’m also thinking of having all the characters be animals (again, like in Night of the Woods). I wonder what animal the player character would be?

After creating a Godot Engine project and GitHub repo, I decided to implement some basic player movement as a simple first step. I copied the player movement code from HeartBeast’s Godot RPG tutorial series and stripped out some of the details, as well as adding WASD and left joystick controls to the project’s Input Map.

I also started working on the aiming mechanic. This was a bit tricky because the gun needs to flip vertically when it reaches certain points in the rotation so that it never ends up upside-down.

I’ve felt creatively stifled for the past few years, what with my full-time job and general “adulting” taking up most of my already low energy supply. A couple weeks ago, I had a day off work on Remembrance Day, so I took the opportunity to have a much needed creative brainstorm. And thus, Bullet Town was born.

I’ve worked on several tiny games in my spare time and at game jams, but I haven’t ever had a long-term passion project like this one is going to be. I’ve worked on bigger games in game studios before, so I’ve seen how much work needs to go into making a legit game, even if it’s a small indie project. It’s extremely daunting, and will likely take 2-3 years to finish, but I’m hoping to follow through and create something that’s playable to the end!

A web/game programming blog by Robyn Choi, a professional JavaScripter and amateur pixel artist in Vancouver, BC. To see some of my work, check out my portfolio website.